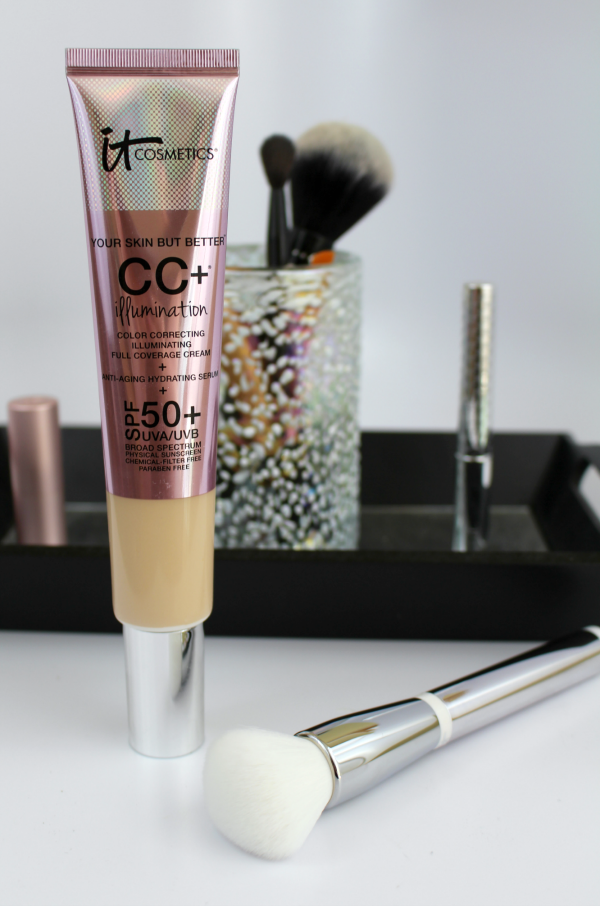 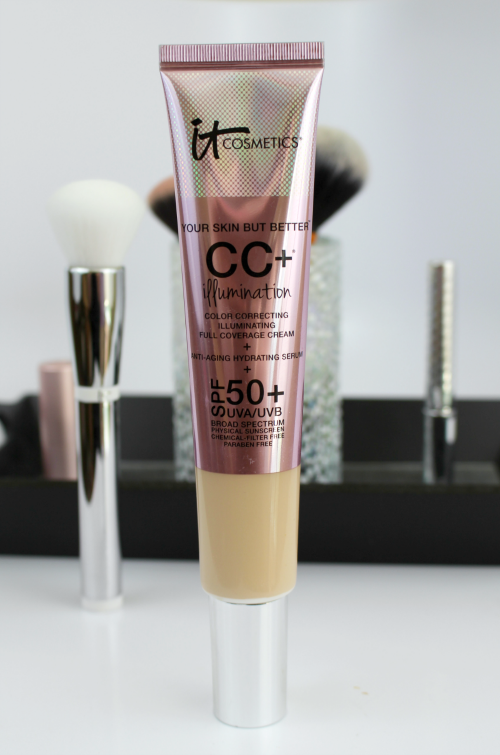 Some of my favorite places to look for beauty deals are QVC and HSN. It’s not something that happens daily but occasionally either site will post up beauty bundle deals. These deals are several items from a brand at a severely discounted price. For example, last year HSN had a bundle that was the Too Faced Chocolate Bar palette, full-sized Too Faced Better Than Sex Mascara, full-sized Too Faced lipstick, and a deluxe sample of the Too Faced eye shadow primer and you could get it for the price of just the Too Faced Chocolate Bar palette. Recently QVC had a similar deal that involved a larger than normal size of the It Cosmetics CC+ Illumination Cream, an It Cosmetics Foundation brush, a full-size It Cosmetics Tightline Mascara, and a full-size Je ne Sais Quoi Hydrating Treatment for less than the price of a normal CC+ Cream and the mascara alone! After a few weeks use, these are my thoughts on the It Cosmetics CC+ Illumination Cream and the It Cosmetics Heavenly Skin CC+ Skin Perfecting Brush. 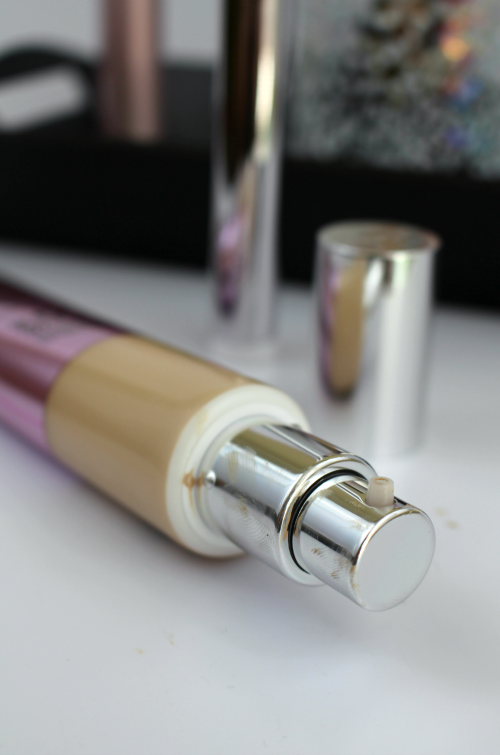 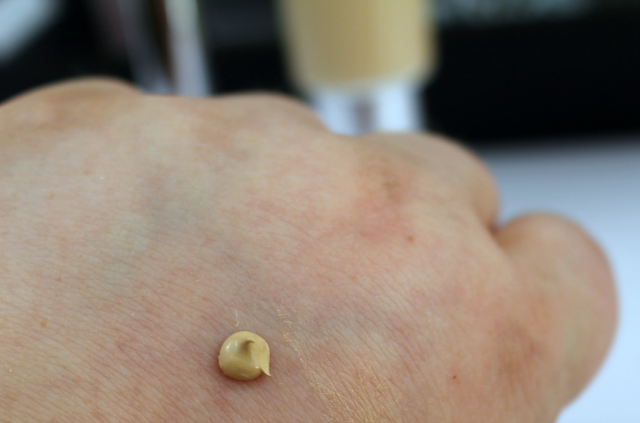 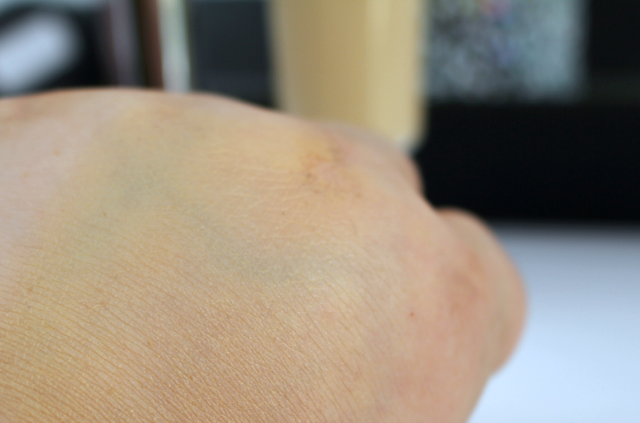 One of the things that I love about the It Cosmetics CC+ Illumination Cream is the packaging. I love that it comes in a plastic tube with a pump nozzle. I find bottled foundations, even with pumps, can tend to waste a lot and the plastic bottles don’t have as much waste. I could be wrong but that’s my perception. As for the formula and coverage of the It Cosmetics CC+ Illumination Cream, the formula feels lightweight and not heavy on my skin while the coverage is a medium one that can be built-up if need be. I found that one layer does a pretty good job of covering any issues that I currently have going on on my face (i.e. dry patches, acne, etc.). The formula is super moisturizing and doesn’t cling to my super dry skin. 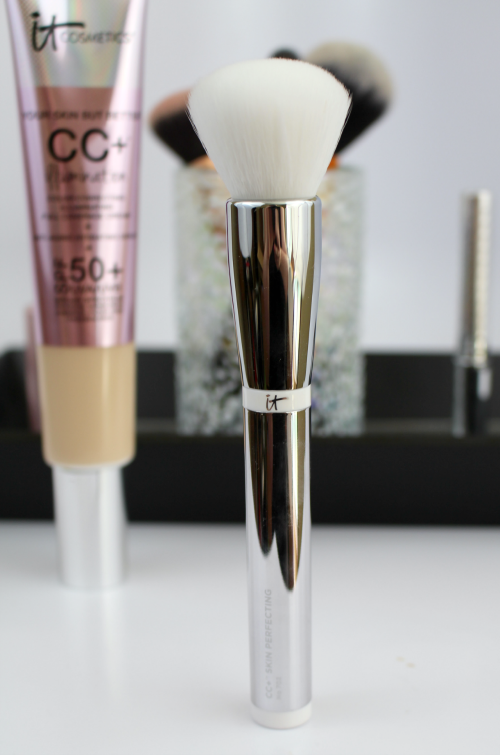 When I opened up the QVC package and saw the It Cosmetics Heavenly Skin CC+ Skin Perfecting Brush I was dismayed. The brush hairs are completely white and the body of the brush is metallic silver and that all spells one thing for me, DIRTY. Before I tossed it into the gift/trade/giveaway pile I decided to read up on it first. The It Cosmetics Heavenly Skin CC+ Brush is said to be ultra-soft with a custom-cut brush head that is supposed to help blur any imperfections like lines and pores. The hairs themselves are said to be made with It Cosmetics patent-pending anti-aging Heavenly Skin bristlest. These bristles are supposedly infused with antioxidants, peptides, and anti-aging collagen to help improve the look of the skin. After reading all of that I HAD to give it a try! 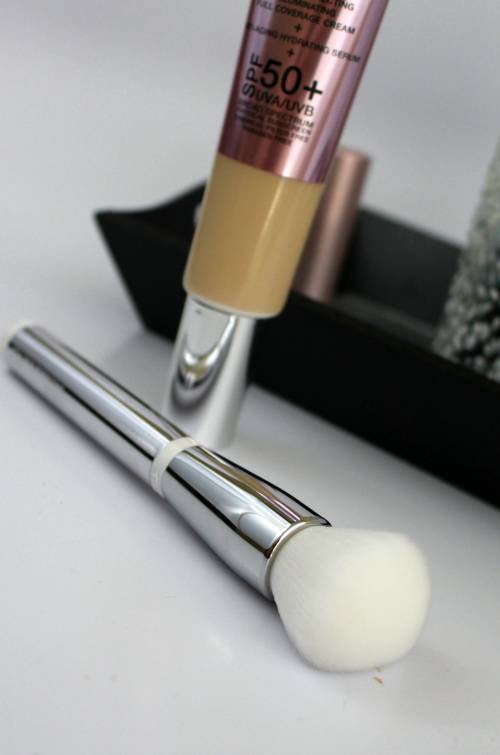 Overall the It Cosmetics CC+ Illumination Cream is amazing and while you can’t currently purchase the Supersize version I do think that if you’re wanting a lightweight, long-lasting, medium coverage foundation with high SPF then you should pick this up. Heck even if you don’t want those things you should pick this up! Just make sure that if you want radiant skin you pick up the It Cosmetics CC+ Illumination Cream and if you don’t pick up the original It Cosmetics CC+ Cream. As for the brush…if this bundle becomes available again pick it up IMMEDIATELY. However, unless you want to pay $48.00 for one makeup brush you’ll have to pass. Don’t get me wrong the It Cosmetics Heavenly Skin CC+ Brush IS worth that price but I’m realistic and know that most people aren’t going to want to pop down that much for one brush, no matter how good it is…