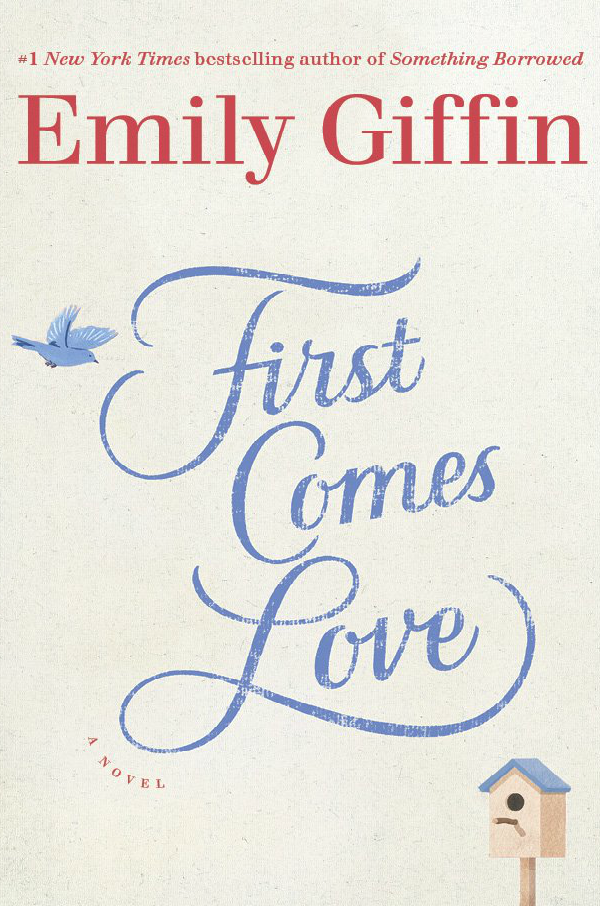 Emily Giffin is a graduate of Wake Forest University and the University of Virginia School of Law. After practicing litigation at a Manhattan firm for several years, she moved to London to write full time. The author of seven New York Times bestselling novels, The One & Only, Something Borrowed, Something Blue, Baby Proof, Love the One You’re With, Heart of the Matter, and Where We Belong, she lives in Atlanta with her husband and three children.

Growing up, Josie and Meredith Garland shared a loving, if sometimes contentious relationship. Josie was impulsive, spirited, and outgoing; Meredith hardworking, thoughtful, and reserved. When tragedy strikes their family, their different responses to the event splinter their delicate bond.

Fifteen years later, Josie and Meredith are in their late thirties, following very different paths. Josie, a first grade teacher, is single – and this close to swearing off dating for good. What she wants more than the right guy, however, is to become a mother – a feeling that is heightened when her ex-boyfriend’s daughter ends up in her class. Determined to have the future she’s always wanted, Josie decides to take matters into her own hands.

On the outside, Meredith is the model daughter with the perfect life. A successful attorney, she’s married to a wonderful man, and together they’re raising a beautiful four-year-old daughter. Yet lately, Meredith feels dissatisfied and restless, secretly wondering if she chose the life that was expected of her rather than the one she truly desired.

As the anniversary of their tragedy looms and painful secrets from the past begin to surface, Josie and Meredith must not only confront the issues that divide them, but also come to terms with their own choices. In their journey toward understanding and forgiveness, both sisters discover they need each other more than they knew…and that in the recipe for true happiness, love always comes first.

Before we get into what I thought about First Comes Love let’s talk about how it’s narrated. The book starts out with a Prologue told from the point-of-view of Josie and Meredith’s mother. In the prologue you find that the tragedy that the family is dealing with is the death of their brother and that the mother thinks that things would have been so different if he had lived. After the prologue ends the mother never narrates another chapter, instead the chapters alternate between Josie and Meredith.

Now that we have that out of the way let’s talk about what I thought about First Comes Love. I started reading the book and the prologue had me super interested and then I read a few chapters from each of the girl’s point-of-view and I wanted to stop reading right then and there. At the beginning of First Comes Love Josie is obsessed with her ex-boyfriend to the point that she is STALKING him, his wife, his daughter, and his young son. Josie is a first grade teacher who found out right before school is supposed to start that her ex’s daughter with his “new” wife is going to be in her class. Josie’s parts actually start fairly close to the first day of school so you find out a lot of this information after the fact through conversations she has with others and conversations others have about her. I decided I was going to tough it out and I kept reading and for the parts of the story from Josie’s point-of-view I’m glad. Throughout the book you find out that Josie has been handling, or not handling, her brother’s death hard. She met her best friend, Gabe, right after her brother’s funeral (he had been a friend of the brother’s) and they’ve been friends and roommates ever since. Emily Giffin goes out of her way to multiple times have Josie point out that her and Gabe are friends only even though everyone thinks there’s been more. So of course you know that there is either going to be more or that there was more at some point. Most of Josie’s chapters are of her coming to terms with the fact that she wants to be a mother so she goes on one last blind date and tells the guy at the beginning that she doesn’t plan on dating him because she’s going to have a baby and be a single mother. This of course intrigues the guy and they actually start up a friendship that plays through the book. Besides the information that goes along with that Josie is also dealing with her sister Meredith’s issues and her feelings on the death of her brother. By the end of the book Josie has grown a lot and I’m glad I stuck through to see it.

Now on to Meredith. NOTHING Emily Giffin could write throughout the whole novel could seem to change my opinion of Meredith. I HATED her. Meredith is overbearing, bossy, has OCD, is cold to her husband and child, and yet she seems to make herself the victim throughout the whole novel. She’s cold to her child and then when Josie comes over to spend time with her niece Meredith’s inner monologue is essentially jealousy and how it’s easy to be the aunt and over come over for fun and games etc. Josie and Meredith have a conversation at this point where she is very rude to Josie and then later that night when her husband wants to go out and the babysitter calls in sick she wants to call Josie to come babysit and then talk about how careless she is when Josie tells her she already has plans. In addition to that when Josie decides to be mature and wants to be a mother Meredith again verbally attacks her about how carless, selfish, and childish she is. Meredith will then decided that she needs a break from her family and go to New York for two weeks. During that time Josie finds out from Noah, Meredith’s husband, the true facts about what happened the night of their brother’s death. She goes to New York to tell Meredith what happened and Meredith accuses her of lying to her for years. By the end of the book Meredith has changed a little bit but still has a long way to go in my opinion.

Overall if you can deal with how catty Meredith seems to be when it comes to her sister and husband then First Comes Love is a good book to check out. Having never read any other books by Emily Giffin I can’t say how First Comes Love stands up against her others but if those are better I can’t wait to try them out!