What It Is: Food subscription box that chooses one country and curates food items from that country.

Billing and Shipping: Boxes have free shipping and the first box ships within 14 days of being billed. Subscription can be paused or canceled anytime.

I’ve had the opportunity to review Try the World boxes in the past and really enjoyed them, click here to read those reviews. Living in a rural area where the closest big city, Columbia, SC, is around 2 hours away it can be difficult to try new items from other countries. Try the World allows the Hubs and I to have items from other countries delivered right to our door to try out. This month’s Try the World box focused on Brazil and had some pretty interesting items in it. 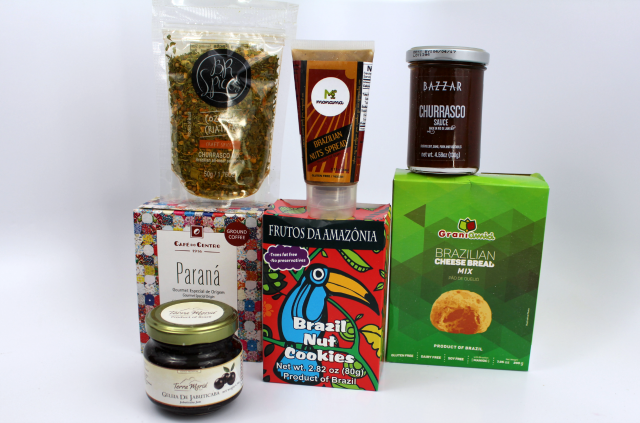 Café do Centro Paraná Coffee Grounds || Coffee is the National Drink of Brazil due to the fact that Brazil produces over a 1/3rd of the world’s coffee. This coffee comes from the Paraná region which is located towards the southern eastern part of Brazil. Café do Centro supports the local Paraná community and the coffee itself is all-natural/organic, sustainably grown, and uses a traditional recipe.

Bazzar Churrasco Sauce || Churrasco is another word for barbecue and is something that Brazil is well known for. The Currasco Sauce can be used as a marinade or dipping sauce same as any other BBQ sauce. This sauce comes from Rio de Janeiro, which is on the west coast of Brazil, from an acclaimed restaurant called Bazzar. The sauce is all-natural/organic and the ingredients are sustainably grown.

BR Spices Churrasco Spice Mix || As previously mentioned, churrasco means barbecue therefore making this a BBQ spice mix/rub. BR Spices is located in Barueri, in between Paraná and Rio de Janeiro, and is known for making traditional seasonings such as this one. This spice mix is all-natural/organic and the ingredients are sustainably grown.

Grani Amici Pão de Queijo Mix || A pão de queijo is a well known snack in Brazil that is crunchy on the outside and doughy on the inside. Located in Jundiaí, Grani Amici uses a traditional recipe to make the pão de queijo and due to the use of tapioca flour this is actually gluten free!

Terra Moriá Jabuticaba Jam || A jabuticaba is a black berry unique to Brazil that can be found growing on the jabuticaba tree. Since Terra Moirá is a family business using a traditional recipe it can get away with not only using less sugar in their jam than other jam recipes but also supporting the local community of Casa Branca. The jam itself is all-natural/organic and uses ingredients that are sustainably grown.

Monama Brazilian Nuts Spread || This Brazilian nut spread combines peanuts, cashews, and baru nuts the latter of which is native to the tropic savannah of central Brazil. In São Paulo, where the Brazilian Nut Spread comes from, Monama supports the local community and uses sustainable ingredients to make the all-natural/organic spread.

Val Alimentos Goiabada || Goiabada is a fruit preserve that is made by boiling guava juice and sugar. Val Alimentos uses a traditional recipe for goiabada and they make it all-natural/organic.

Overall this was an amazing box. The Hubs has already tried the brazil nut cookies and the paraná coffee grounds and he loves them both! We’re also planning on having the pão de queijo’s when we have gluten free spaghetti this week.