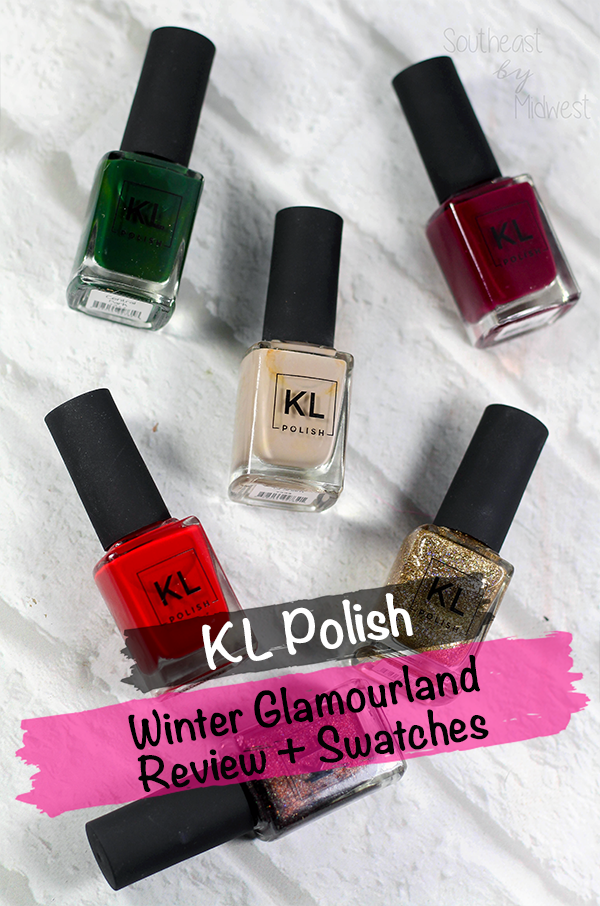 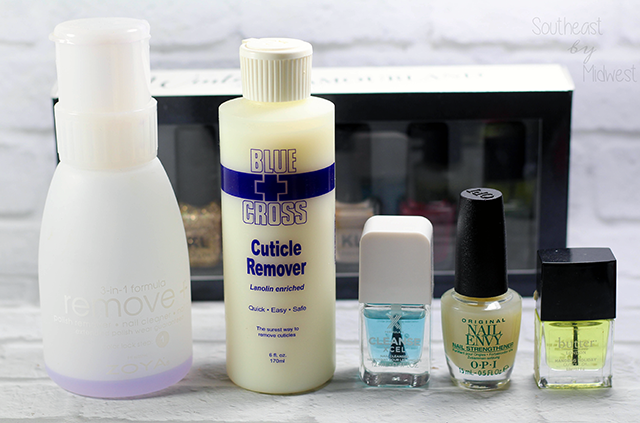 If you were around a few KL Polish Collections ago then you know I started letting you know what pre and post polish products I’m using. I used the Zoya Polish Remover to remove my nail polish. I then went in and applied the Blue Cross Cuticle Remover on my cuticles before pushing them back. After buffing my nails I went in with the butterLondon Cuticle Oil on and around my cuticles, I would link this but I can’t find it available anywhere which is a shame because this my FAVORITE cuticle oil. Keeping with the no longer available theme, I use the Formula X Clean to remove all the oils from my nail before continuing. I don’t know what I’m going to do when my Formula X products run out besides cry big baby tears. To finish up the pre steps I put on OPI Nail Strengthener Top Coat and then watched some YouTube videos while it dried. 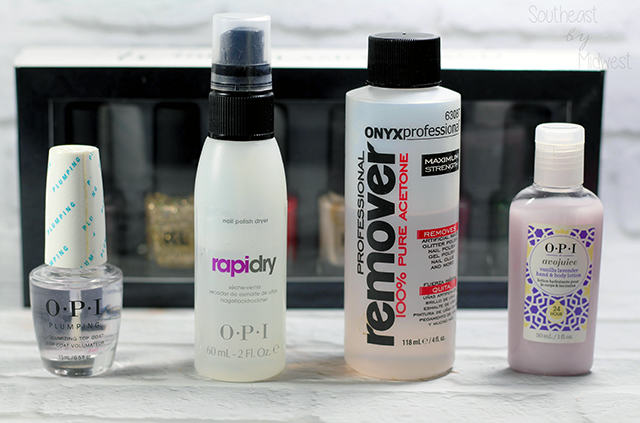 Once the second coat dries for each swatch I go in with the Onyx Professional Acetone and a small brush to clean up around the cuticle and edge of my nail. Once done with that, I go in with the OPI Plumping Top Coat as my top coat (this links to a duo set for $6 because all the singles for this were way more than that). Right after finishing the last nail with top I hurry and spray with OPI Rapidry Nail Polish Dryer which helps the nails to dry faster. I finish each manicure with the OPI Avojuice which are some of my favorite hand lotions, you can actually read my review here. 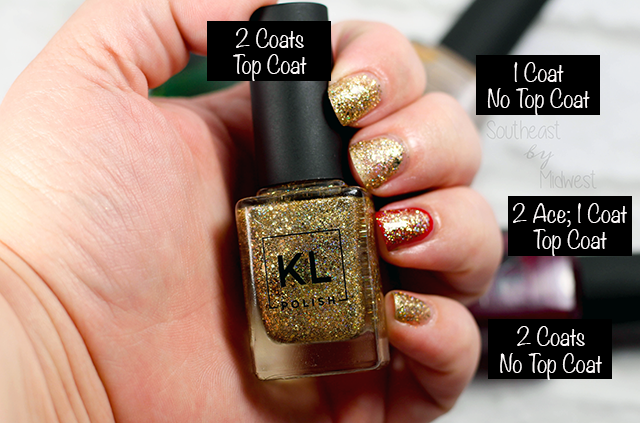 Casino Night is a gold polish in a glitter finish and is named after an episode of The Office. Due to it being a glitter polish, Casino Night CAN be opaque in one coat if you layer and polish it correctly. It does layer really well which is good if you happen to do not get it opaque enough in the first coat. If you look at the ring finger you can see that Casino Night can be layered over other polishes, however, you might want to clean the brush off a bit first. All that being said, this polish is HORRIBLE to remove and I still had glitter clinging to my cuticles and hands the next day! 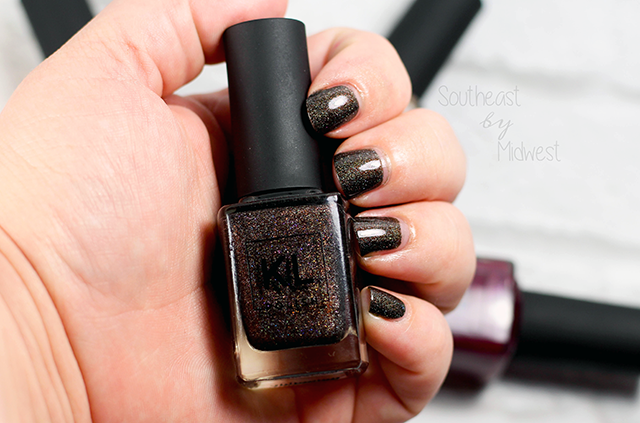 Cassiopeia is a dark gray, almost black, polish with multi-dimensional glitter giving it a holographic finish and is named after the constellation Cassiopeia. Cassiopeia is not opaque in one coat but it does layer well. Cassiopeia’s glitter is built-into the base polish so it’s not hard to remove and it doesn’t have a texture at all. This was probably one of my favorite polishes from the collection. 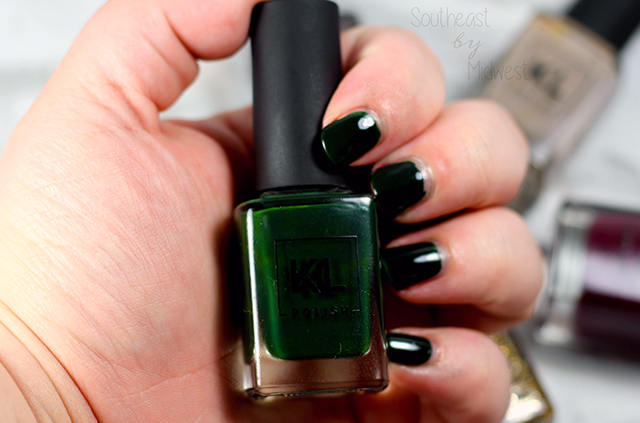 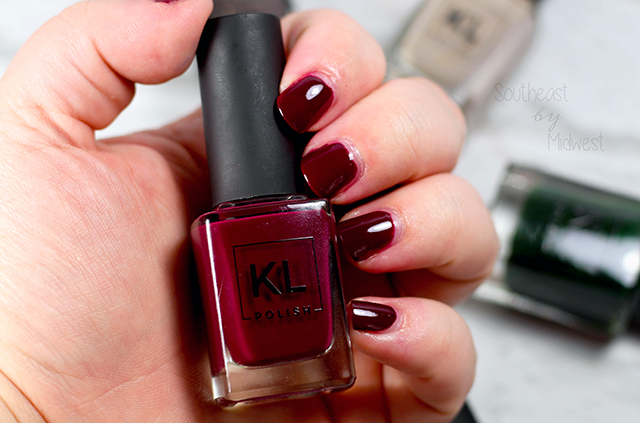 Mindy is a deep berry polish in a creme finish and is named after the actress Mindy Kaling. Mindy was not opaque in one coat but it does layer well and dry fast so it’s not horrible that you HAVE to do two coats with this polish. This, along with most of the other polishes (Central Park was the exception), wore well but it did stain the fingers and nails slightly when removing. To avoid that, I suggest using a different cotton pad for each nail. 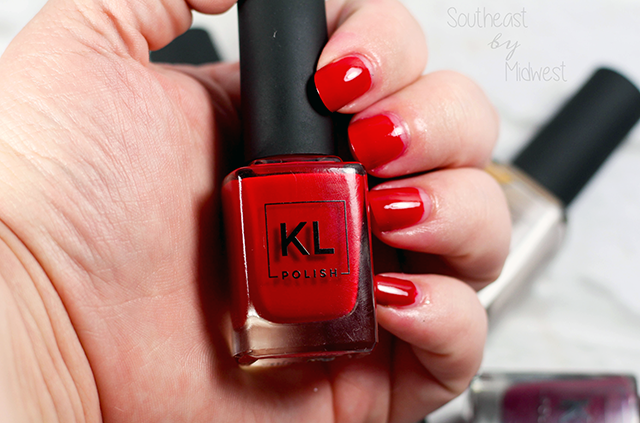 Ace is a brilliant red polish, normally my go to shade by the way, in a creme finish and is named after Rory from Gilmore Girls. Ace, oh Ace, where do I start. First off, it was like Mindy and stained like you wouldn’t believe. To go along with that it was HORRIBLE to clean up because it had a similar tacky texture as Central Park just not as bad. In all honesty, reds are my favorite nail polish color and this is by far no where near my favorites list. I would suggest OPI Cajun Shrimp before I ever recommend this to someone. 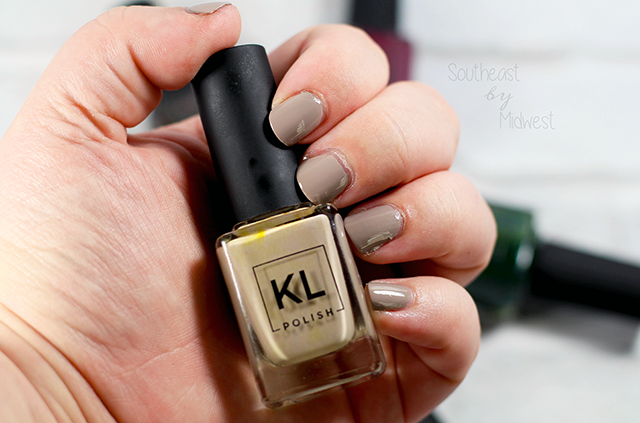 Graham is a slate gray polish in a creme finish and is named after Graham from The Holiday. Graham was actually opaque in one coat, which surprised me for a more neutral color. I did, however, go in with two coats because I just always do and found that this layered well as well. I will say that you will probably want to clean the brush in the neck of the bottle before applying because a little goes a long way with this polish. Graham was actually another favorite from this collection! 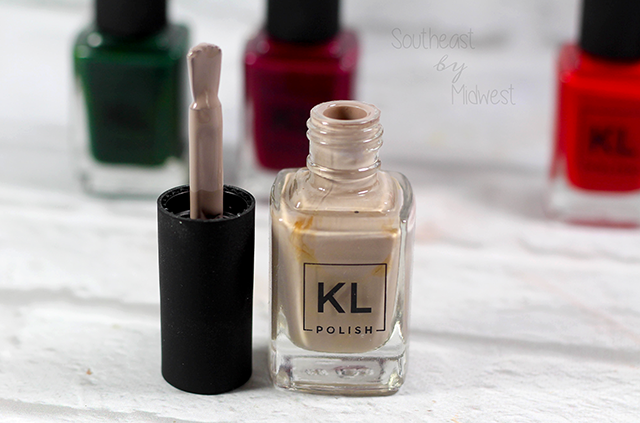 Overall the KL Polish Winter Glamourland Collection has some shades that are gorgeous for fall, winter, or just whenever you want to use them. It does, however, have some polishes that have some issues and with a price increase a few months back that isn’t what Kathleen really needs. To go along with that, while this collection did ship in a box with a sheet of tissue paper, every other collection has shipped in a padded envelope with not great results. With both of those two factored in I can only really recommend Cassiopeia and Graham and only if you don’t have them in your collection from another brand OR if you’re looking for a cruelty free and 12-free polish in these shades and you don’t know another brand. I still have the Ethereal Garden Collection to review (which was this Spring) and possibly the Havana Heat Collection (this Summer’s collection) to get so let’s hope it gets better! 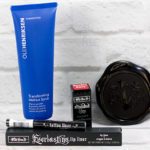 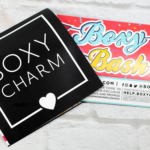 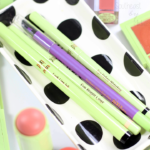