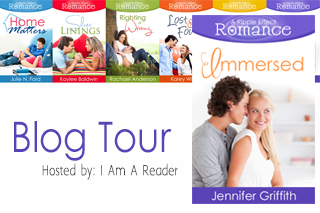 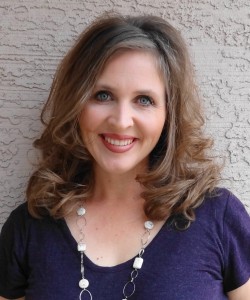 Jennifer Griffith studied French, German, Japanese, and a wee bit of Spanish in her school days. Her grandmother was Norwegian, and Jennifer grew up with lots of Scandinavian traditions floating around, including fabulous cardamon laced cookies called Krumkaker, made on a fancy waffle iron. However, she’d never dream of trying to teach someone any of those languages. And she might botch the cookies. Instead, she writes novels in English, drives her five kids a million places, and laughs with her husband, who came up with the plot for Immersed because he’s just a cool muse like that. 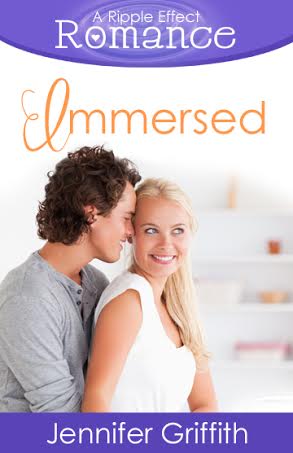 “Lisette Pannebaker speaks five languages and has a brilliant business plan—personal language immersion. Clients can hire her to shadow them and speak all day in any language they need to learn for business or travel—whatever. But there’s a major hitch: she’s far too pretty. Clients with less than honorable intentions sign up just to have Lisette at their side. Solution? A make-under. Way under.The bad wig, icky makeup and puffy sweaters work like a charm. None of her male clients show her the least bit of interest. Lisette’s totally relieved.Until…Erik.Erik Gunnarson is charming, kind, and smart—everything she’s ever looked for. Every day as his tutor is making her fall for him more. Even though he seems to have a secret, and she’s sworn she’d never date a client, Lisette is tempted to shed her disguise—although it could mean jeopardizing her career.“

Silver Linings is the second book in the Ripple Effect Romance Series. Come back in exactly two weeks for a review of Righting a Wrong and then every two weeks after that I will review the other books in the series. I will link the list below with all the reviews as I release them if you’d like to bookmark this page for future reference!”

*NOTE: While these books are part of a series, they CAN be read individually without issue.

Immersed was by far my least favorite of the series. The connection between Immersed and Second Chances 101 is Alex’s daughter, Sam, is now living in Colorado and she is the one who gives Lisette her makeover. To be honest I actually only realized that she was the connection because at the end of Second Chances 101 in the excepert for Immersed it mentions that Sam is going to be in it. Sam is actually in the book for so little amount of time that this really could have been a stand alone book, I probably would have liked it a bit better in that case.

As for the story, I felt that it was rushed and that a lot was crammed into it for it being just a novella. The worst part though is that I could not like Lisette because I found her to be the biggest kind of hypocrite. The story starts with Lisette having just graduated grad school and she thinks her boyfriend is about to propose to her. Well he turns out to have just been using her to get help through his classes and pick out a ring for his actual girlfriend, OUCH. After suffering through that Lisette winds up behind a guy who is “nerdy looking” and who asks her out to dinner, which she refuses. Fast forward a few years and Lisette has borrowed money from her mother to open her own business, Immersed, where she will spend 8 hours a day with a minimum of a two week commitment with her clients speaking to them in only the language they are paying her to learn. This sounds like a great concept, however, Lisette is so good looking that most of her clients would rather hit on her or make passes at her than actually learn the language. Lisette’s Aunt Corky has the idea of having a make-under, done by Sam, to hide how hot she is.

Fast forward a few more years and Lisette is on the brink of being able to pay her mother back and she just needs one last client, enter Erik a smokin’ hot Norwegian guy. Lisette at first chalks him up to a snob, however, over their time together she comes to find that she is starting to REALLY like this guy. Lisette actually starts to like him so much that she starts letting pieces of her make-under go here and there. Things come to a point when Erik invites Lisette to attend an award benefit with him where he is receiving an award, aware of what this could mean for her company Lisette decides to forgo her disguise and go as her gorgeous self. While at the party they run into the boyfriend from the beginning who lets Erik’s secret slip, he actually went to school with him and Lisette! As a matter-of -fact, he’s the “nerdy looking” guy who asked her out, mad that he lied and kept secrets from her Lisette storms off.

If you’d like to know whether or not Lisette and Erik windup together…or if Lisette decides to just be single for awhile head over to Amazon to purchase this book and give it a read for yourself.