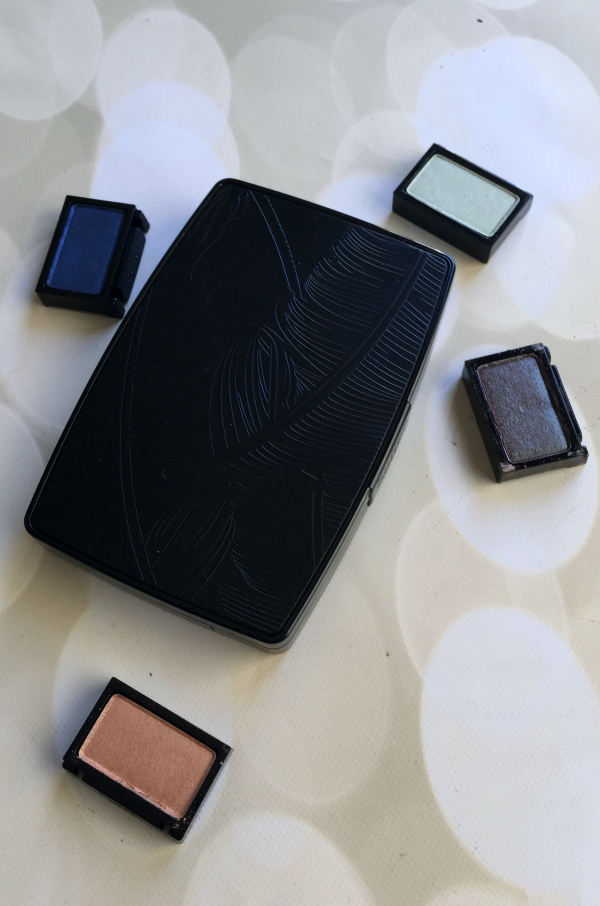 I was so excited when I heard about the butter LONDON Shadow Clutch and I was even more excited when it and two of the shadow duos showed up on my door. I’m always a little scared when trying new products from brands that are well known for making other products as I’m afraid it’s just going to go horribly wrong. However, after trying (and loving!) the Bloody Brilliant Lip Crayons I was more than willing to give these a chance! Oh and guess what, I’m back to filming videos!! 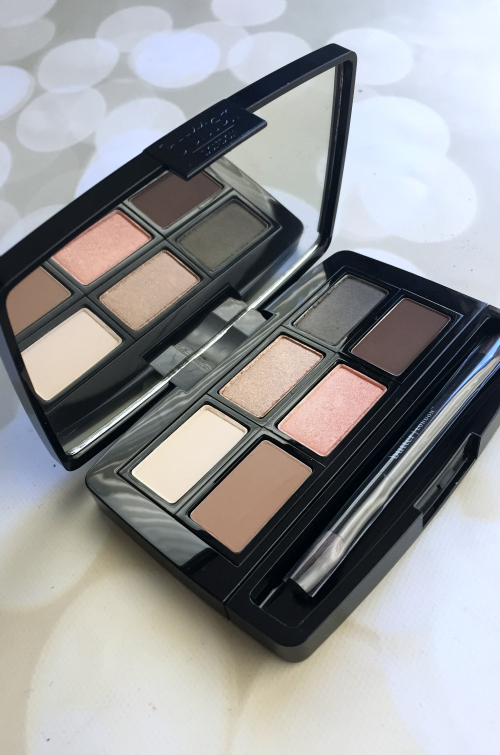 Before we jump into swatches let’s talk about the actual palette itself. The first thing you should know about the palette is that it’s customizable, I’ll get into that more in the post but to see that in action check out the video above! Next the shadows themselves are primer infused and oil absorbing. This means that they’re going to go on smooth and have some staying power. Lastly there are currently two palettes that each have six shadows. The first palette, and the one that I received, is the Natural Charm Palette and the other palette is the Pretty Proper Palette. 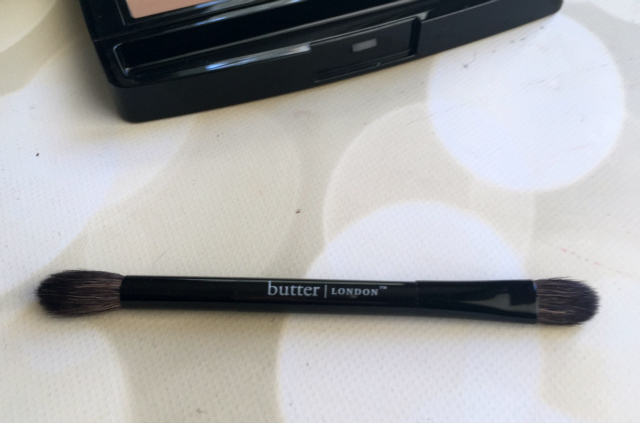 Also before we talk about the actual shadows let’s talk a bit about this brush that came in the palette. One end is a flat shading brush and the other is a small crease brush. When swatching these shadows I used an Urban Decay Shader Brush to swatch half of them and I used the shader end of this brush to to swatch the other half. I’m interested in knowing if you can tell which brush did which swatching! That part aside I actually really liked the brush with this palette and may actually take it out of the palette and add it to my brush collection! 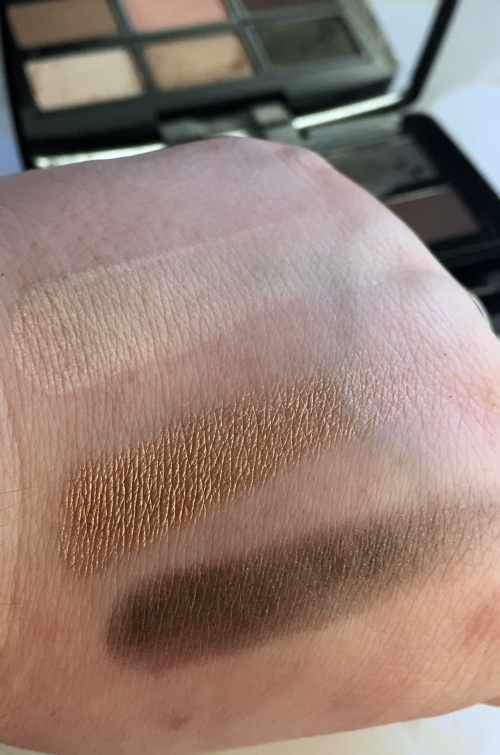 Okay, NOW it’s swatching time! These three swatches are from the top row of the Natural Charm Palette and they are (from top to bottom) Linen, Quartz, and Camo. All of these swatched beautifully, were soft but not to soft, and had no fall out especially when proper brush tapping techniques were used. All that being said Quartz is for sure my favorite of these three but all are gorgeous. Seriously, I could make a look with just these three shadows! 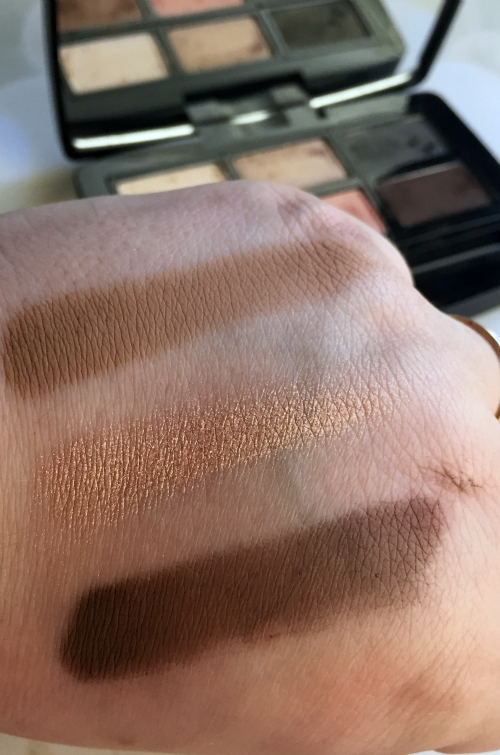 The next three swatches are from the bottom row of the Natural Charm Palette and they are (from top to bottom) Camel, Citrine, and Leather. Again these all swatched beautifully and had no fallout. I do have to say “That camel doe” wowza the soft brown butteryness of it rocks my socks off people! I will say that while Citrine does have a bit of pink in it, I feel that it is awfully close to Quartz and I probably wouldn’t keep them both in the palette at the same time…oops…

Well I guess since I mentioned it I might as tell you about it now, le sigh. Seriously though, let’s talk about how exactly the Shadow Clutch is customizable. What is unique about the Shadow Clutch is that the casing that holds the shadows in place actually lifts up allowing you to slide shadows out of whichever of the two you purchased and slide in any shadow from the four shadow duos currently available. To changeout the Shadow Clutch you just lift the casing on the clutch, slide out whichever shadow you are taking out, slide in whichever from the set that you are going to be putting in, shut the casing, put the shadow from the clutch into the little container you just pulled the duo out of, close it, and you’re done! Voila!! 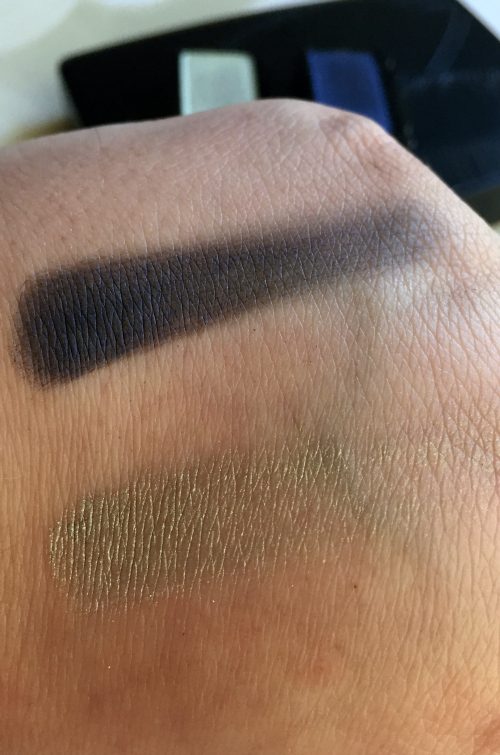 One of the shadow duos currently available is Moody Blues. Moody Blues contains a blue shadow, Sapphire, and a green shadow, Sequins. Sapphire is a deep navy blue, while Sequins is a soft mint green. Both of these swatched as amazingly as the ones from the clutch did! 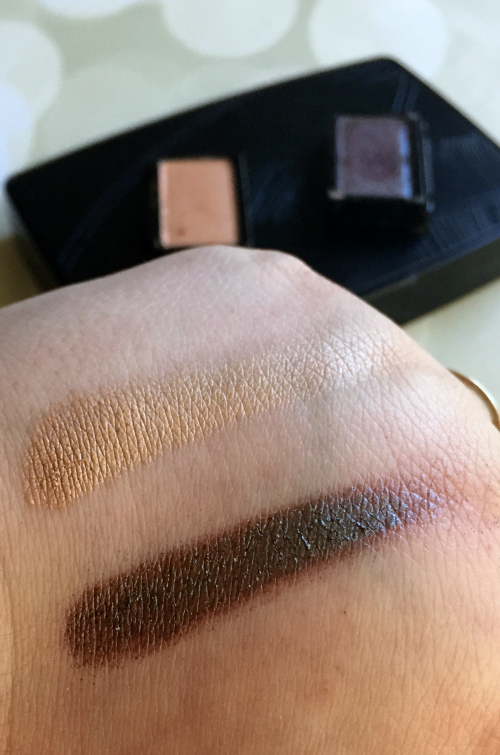 Another one of the shadow duos currently available is Fancy Flutter. Fancy Flutter contains a beige shadow, Feather, and a “chameleon” shadow, Plume. OMG Plume is amazeballs, it is my life, I swear I not only need a backup of this shadow my backups backup needs a backup.

As you can tell I think the butter LONDON Shadow Clutch is absolutely genius and the quality of the shadows are amazing. You can pickup the Shadow Clutch for $39 at Ulta and the shadow duos for $15 each (I’ll be getting the other two myself shortly!).

Which shadows do YOU think were swatched with the butter LONDON brush?

Check Out My Other butter LONDON Posts