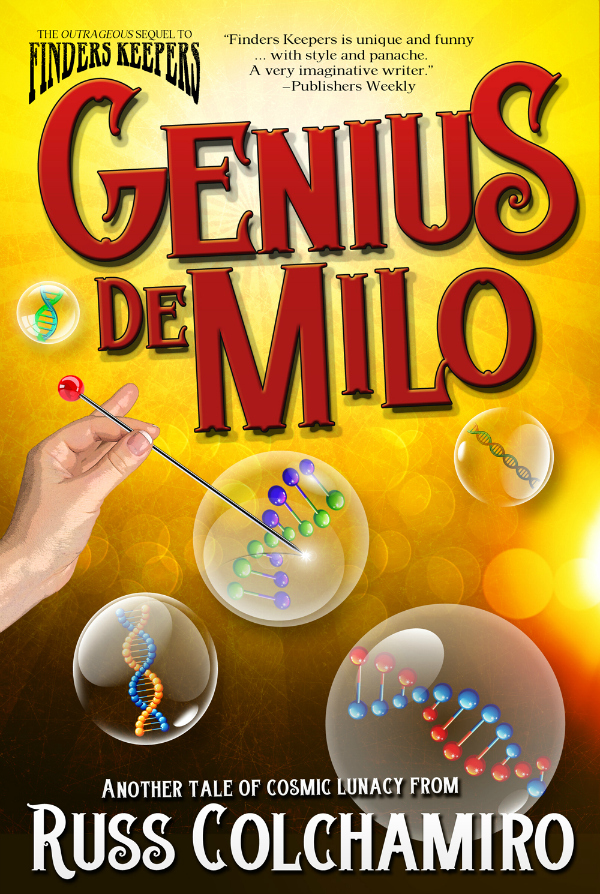 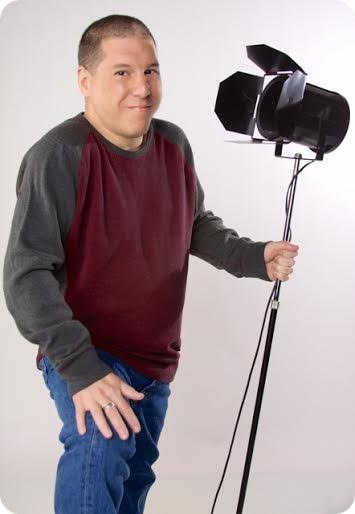 Russ Colchamiro is the author of the rollicking space adventure Crossline, the hilarious scifi backpacking comedy Finders Keepers, and the outrageous sequel, Genius de Milo, all with Crazy 8 Press.

Russ lives in West Orange, NJ, with his wife, two children, and crazy dog, Simon, who may in fact be an alien himself. Russ is now at work on the final book in the Finders Keepers trilogy.

As a matter of full disclosure, readers should not be surprised if Russ spontaneously teleports in a blast of white light followed by screaming fluorescent color and the feeling of being sucked through a tornado. It’s just how he gets around — windier than the bus, for sure, but much quicker.

Best pals Jason Medley and Theo Barnes barely survived a backpacking trip through Europe and New Zealand that — thanks to a jar of Cosmic Building Material they found — almost wiped out the galaxy.

But just as they embrace a future without any more cosmic lunacy: The Earth has started fluxing in and out of Existence; Theo’s twin girls are teleporting; and Jason can’t tell which version of his life is real. All because of Milo, the Universe’s ultimate gremlin.

Joined by the mysterious Jamie — a down-and-out hotel clerk from Eternity — Jason and Theo reunite on a frantic, cross-country chase across America, praying they can retrieve that radioactive jar, circumvent Milo, and save the Earth from irrevocable disaster.

I should start out this review by stating that Genius de Milo is the second book in a trilogy. I agreed to review this book before I knew that, which is totally my fault, so when I realized it was a sequel I was a bit apprehensive. I started the book expecting to come in on the middle of a big plot and feel lost most of the time. I have to say that I was pleasantly surprised that none of this was the case. While I think that reading the first book in the series would have left me more connected to the characters I in no way felt lost without a map while I was reading it. Don’t get me wrong, Mr. Colchamiro does a great job of connecting the two books, however, he also does a great job of introducing you to the characters and the story lines if you happen to be coming in at the middle. It really just makes me want to go back and read the first one even more, while I wait for the third one.

As for the story itself, it’s a rather cute “buddy comedy” type of story but with some science fiction elements added in. When I was over at Goodreads to get the synopsis for the book I saw in a review that someone mentioned that this reminded them of Bill and Ted’s Excellent Adventure and I could TOTALLY see that. All-in-all I think that this was a great book that anyone who wants a bit of lightheartedness (comedy), and is willing to open their minds to a bit of science fiction, in their lives should read.