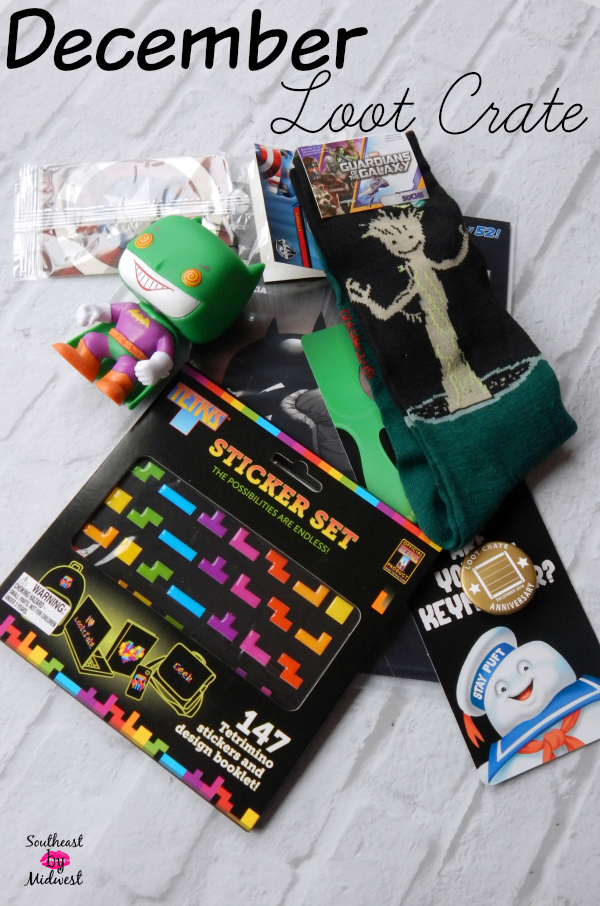 I subscribed to another subscription box. This one is a bit different but it’s super fun. Loot Crate is a monthly “geek” themed curated box. There is not a promised number of items or certain items. A monthly subscription costs $13.37 plus $6 shipping. One thing to note about the December Loot Crate, or Loot Crate in general, is that they have a lot of exclusive items because of that I won’t be able to link you to some of the items and a lot of the values will have to be estimated.

If you are unable to watch the above video, click here.

The first item in the December Loot Crate box was a pair of Dancing Groot Guardians of the Galaxy socks. This is one of the first exclusive items in the box and therefore I can’t link you to purchase these, no matter how cute they are. These were sized for a man’s shoe size of 9 – 12 so, unfortunately, I traded them away as they would be to small for my husband and to big for me. 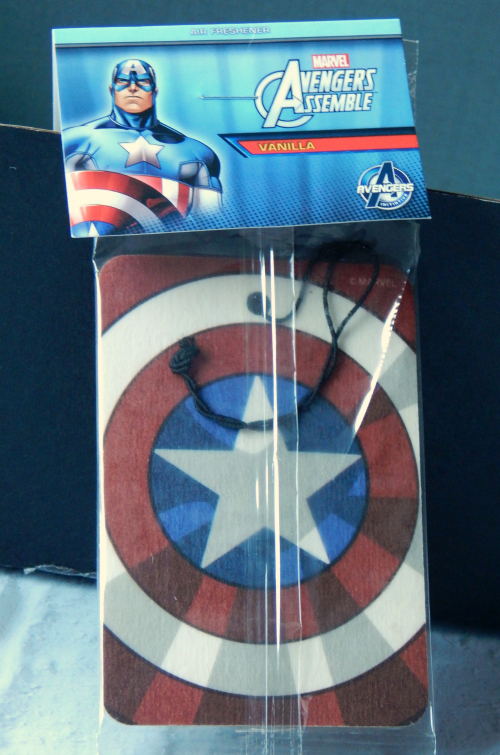 The second item in the December Loot Crate was a Captain America Air Freshener. Immediately after filming the unboxing and taking pictures this was hung in our car. These were not a Loot Crate exclusive and supposedly you can get them at your local Walmart, however, that is very YMMV. 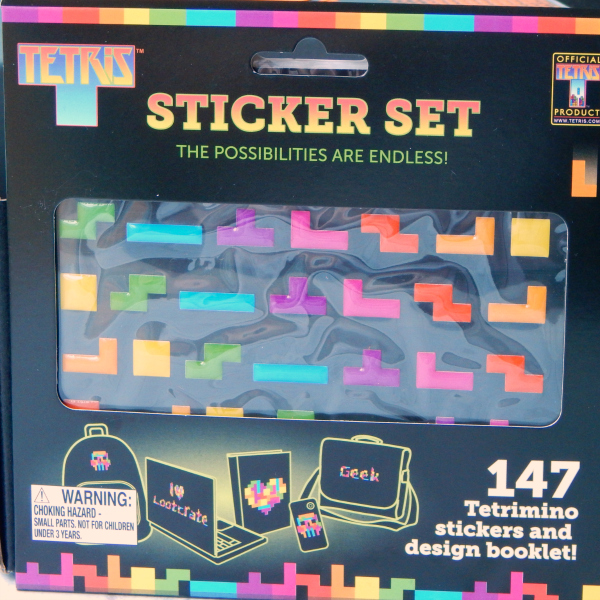 The third item in the December Loot Crate was a pack of Tetris Stickers. The Hubs, who loves himself some Tetris, was super excited to see these. While they aren’t listed as being a Loot Crate exclusive they are super hard to find purchasable. 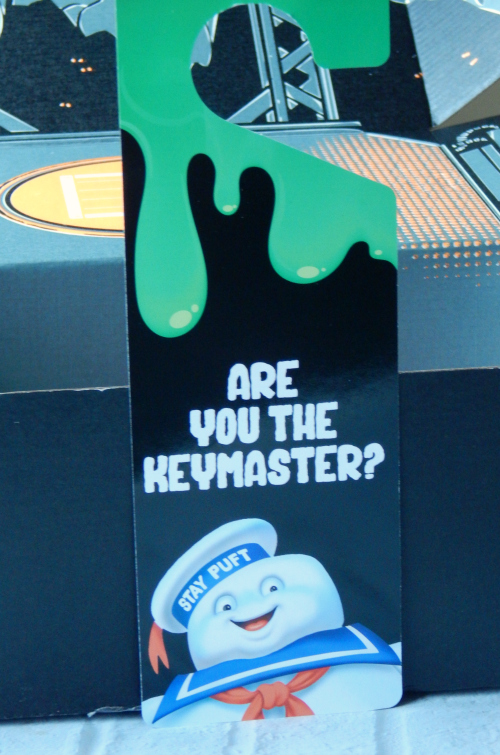 The fourth item in the December Loot Crate was another exclusive, a Ghostbusters Door Hanger. While the Hubs, who is a big Ghostbusters fan, was excited to see this I was a little less so. The quality for this one was just super cruddy and the handle already had a bend in it from packaging. I think this could have stood with a little lamination which wouldn’t have added that much more to the cost of making it. 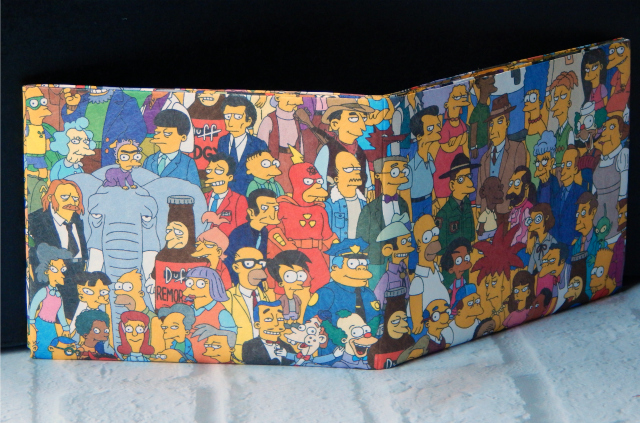 The fifth item in the December Loot Crate was a Simpsons Mighty Wallet. Again the Hubs was thrilled when he saw this. He had lost his last wallet and was putting off getting a new one plus we’ve heard great things about the Mighty Wallets. He’s been using this since the middle of December and it still looks brand new. 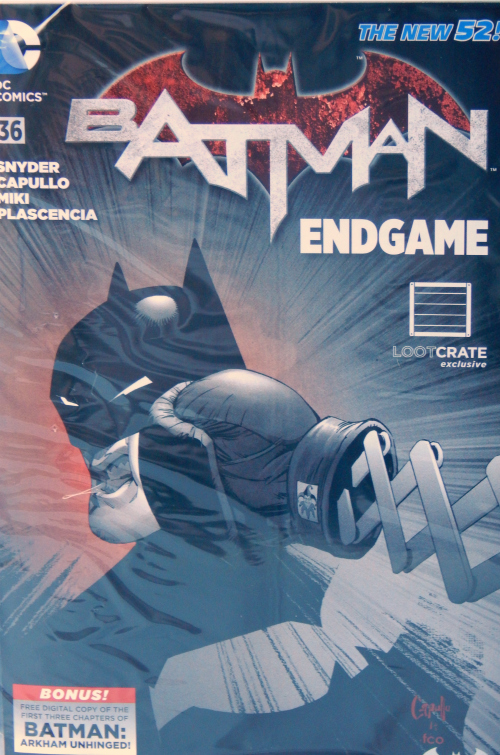 The sixth item in the December Loot Crate was an issue of the Batman Endgame Comic, number 36 specifically. The cover for this was a variant and was actually a Loot Crate exclusive. The Hubs still hasn’t decided if he wants to take this out of the package or not. 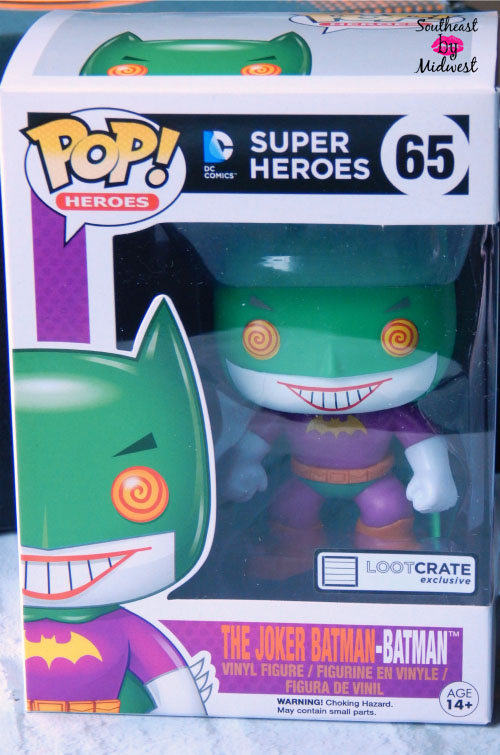 The last and final item in the December Loot Crate was a Pop Vinyl. The Hubs collects these so again it was great to see this in the box. To top it off it was another Loot Crate exclusive. The Hubs decided not to leave this one in the box as he collects these for how they look not what they will one day get him in value. I think this might be his favorite Pop Vinyl that he has now. 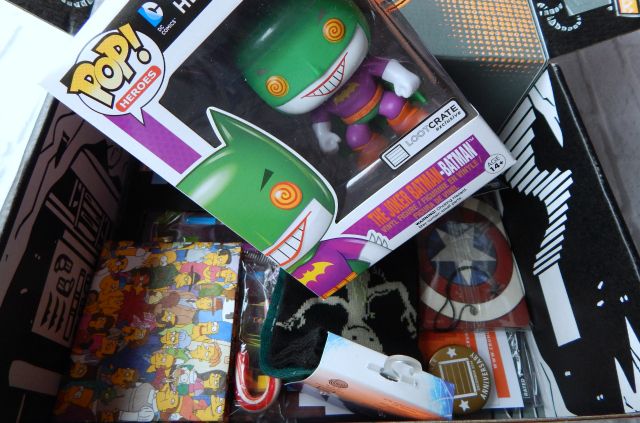