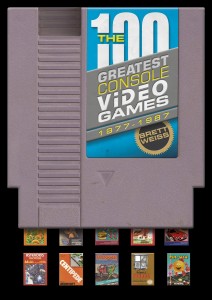 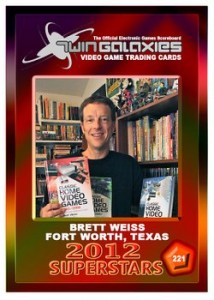 Weiss lives in Fort Worth, Texas with his wife, his two children, and their pets. Learn more about Brett Weiss at his blog Words of Wonder.

There have been many top 100 books before, but rarely one like this. Here are the best of the early video games, shown in over 400 color photos and described in incredible detail in the entertaining and informative text. Each game’s entry features production history, critical commentary, quotes from industry professionals, gameplay details, comparisons to other games, and more. This book celebrates the very best of the interactive entertainment industry’s games from this highly crucial, fondly remembered decade. This pivotal period was marked by the introduction of the indispensable Atari 2600, Odyssey2, and Intellivision, the unleashing of the underrated Vectrex, the mind-blowing debut of the next-gen ColecoVision and Atari 5200, plus the rebirth of the industry through Nintendo’s legendary juggernaut, the NES.

Whether you’re young or old, new to the hobby or a hardcore collector, this book will introduce you to or remind you of some of the greatest, most historically important games ever made.

Although I’ve recently traded in playing games on my PlayStation 4 for reading books on my Kindle Fire, I retain a deep love and appreciation for the games of my youth. Although I didn’t have a home console of my own until 1988, I count myself among that first generation of gamers raised on systems such as the Atari 2600, Intellivision, ColecoVision, and (of course) the Nintendo Entertainment System. Despite this, I was somewhat reserved when I was given the chance to review 100 Greatest Console Video Games: 1977 – 1987. Given the countless video game databases and top whatever lists populating the Internet, I prematurely judged that Brett Weiss’s work would either be a stuffy and soulless encyclopedia or a pompous “this is why I am right” countdown of the biggest hits of the first decade of gaming. 100 Greatest Console Video Games: 1977 – 1987 is anything but.

Rather than regurgitating a deluge of uninteresting details, Weiss provides a brief (but informative) history lesson on each of his chosen titles while deftly explaining why each deserves to be considered one of the best games of its time. Of course, as the author notes, this is all just one man’s opinion. Fortunately, Weiss has compiled a wealth of carefully researched quotes from game developers, critics, and even other fans to help backup his opinion. These quotes not only provide wonderful insight into the development process of many of these classic titles, but also serve to display just how well (or poorly in some cases) each game was received upon its initial release and thus help define the lasting legacy of each entry.

The listings go well beyond Weiss’s reasonings and quotable quotations, however. Each game is explained and dissected in brief-but-somehow-detailed synopses, fleshed out with interesting tidbits of trivia, priced for all the collectors out there, and brought to life in full color pictures of box art, screenshots, and promotional materials. As if all of this wasn’t enough, Weiss includes an appendix of another 100 games as “honorable mentions” with a short explanation as to why these titles almost (but didn’t quite) make the top 100. The amount of information and detail that has been put into this book is quite staggering, showing just how much a labor of love it really was.

As impressive as the treasure trove of information, trivia, and quotes provided for each game is, it is Weiss’s own anecdotes and ruminations that turn 100 Greatest Console Video Games: 1977 – 1987 into the enjoyable nostalgia trip that it is. Weiss’s personal stories and (often funny) commentary made me feel like I was sharing memories with a good friend rather than reading a book. More importantly, it reminded me of why I loved video games in the first place and reconnected me with a part of my childhood that I thought had been lost to time.

Sure to generate much discussion and ire from it’s readers (Indeed, it is one of the author’s stated goals), 100 Greatest Console Video Games: 1977 – 1987 is the definitive guide to the formative era of gaming. Walking a fine line between personal commentary and fact based conclusions, Weiss has provided us with a trip to the National Museum of Video Game Arts & Sciences (if such a place actually existed) in book form. I eagerly hope for and await his list of the 100 best games of the next decade.