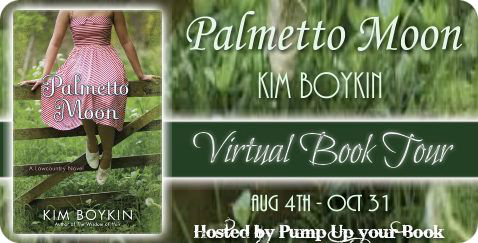 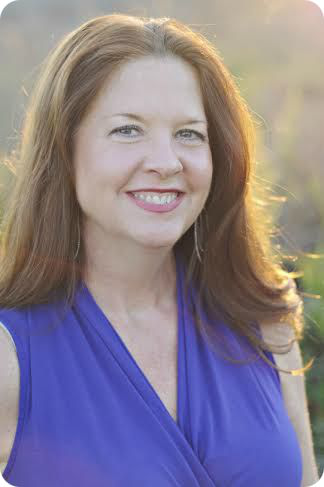 Kim Boykin was raised in her South Carolina home with two girly sisters and great parents. She had a happy, boring childhood, which sucks if you’re a writer because you have to create your own crazy. PLUS after you’re published and you’re being interviewed, it’s very appealing when the author actually lived in Crazy Town or somewhere in the general vicinity.

Almost everything she learned about writing, she learned from her grandpa, an oral storyteller, who was a master teacher of pacing and sensory detail. He held court under an old mimosa tree on the family farm, where people used to come from all around to hear him tell stories about growing up in rural Georgia and share his unique take on the world.

As a stay-at-home mom, Kim started writing, grabbing snip-its of time in the car rider line or on the bleachers at swim practice. After her kids left the nest, she started submitting her work, sold her first novel at 53, and has been writing like crazy ever since.

Thanks to the lessons she learned under that mimosa tree, her books are well reviewed and, according to RT Book Reviews, feel like they’re being told across a kitchen table. She is the author of The Wisdom of Hair from Berkley, Steal Me, Cowboy and Sweet Home Carolina from Tule, and Palmetto Moon also from Berkley on August 5th, 2014. While her heart is always in the Lowcountry of South Carolina, she lives in Charlotte and has a heart for hairstylist, librarians, and book junkies like herself. 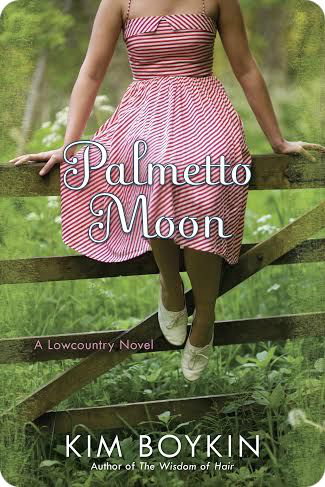 June, 1947. Charleston is poised to celebrate the biggest wedding in high-society history, the joining of two of the oldest families in the city. Except the bride is nowhere to be found…

Unlike the rest of the debs she grew up with, Vada Hadley doesn’t see marrying Justin McLeod as a blessing — she sees it as a life sentence. So when she finds herself on day away from a wedding she doesn’t want, she’s left with no choice but to run away from the future her parents have so carefully planned for her.

In Round O, South Carolina, Vada finds independence in the unexpected friendships she forms at the boarding house where she stays, and a quiet yet fulfilling courtship with the local diner owner, Frank Darling. For the first time in her life, she finally feels like she’s where she’s meant to be. But when her dear friend Darby hunts her down, needing help, Vada will have to confront the life she gave up — and decide where her heart truly belongs.

Palmetto Moon starts off with Vada Hadley living a posh life in Charleston, SC. Vada has a mother and father and then servants that are like her mother and father, she also has a fiancee…one she doesn’t want. When Rosa Lee, her surrogate mother, talks her into stealing away at night you find that this has actually been Vada’s plan for awhile, if she can work up the courage. She runs off to a little town called Round O where she had applied for a job before. She secures lodging at a boarding house, run by a mean lady, makes friends with the local widow, Claire, and her three children who live in the boarding house as well. She also secures a job and meets the owner of the local diner. Vada starts dating Frank, and learns that the town keeps him at arms length because of somethings that happen in his past. However, Vada doesn’t have time to ponder all of this as she gets a call from home that someone is calling asking for her as they know the whereabouts of her best friend Darby. Darby had previously ran away from Charleston when things got bad for her, Darby is the one who gave Vada the courage to see that she could leave and make her own future. The person who calls Vada though does not make it sound like Darby found the happily ever after that Vada is on the path to. So Vada sets out to find her friend and bring her to Round O.

Palmetto Moon is superbly written and does a great job of bringing you along in the story. While the story takes place in the 1940’s I could actually picture them driving to Walterboro and to Augusta. The story is not rushed at all and carries a good pace. Along with that, the characters are all well written and none are presented as an afterthought. Overall, I really enjoyed this book and I can’t wait to read her others.

Will Vada find Darby? Will Darby out Vada’s secret life? Will the town come to embrace Frank via Vada? Will Vada get her Happy Ever After with Frank? Or will she be forced to go back and marry Justin? Read Palmetto Moon to find out by clicking here!