You are here: Home / Beautiful Mind / Raspberries and Vinegar by Valerie Comer Review

“I was provided this book by the author to review, however, all opinions are my own . For more information please visit my disclosure page.” 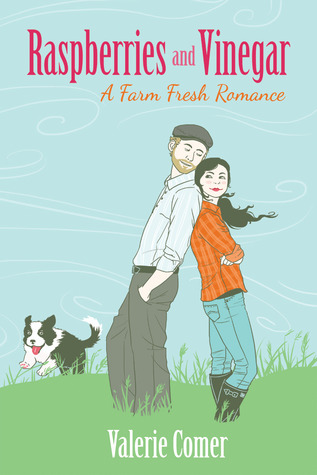 “Josephine Shaw: Complex, yet singleminded. A tiny woman with big ideas and, some would say, a mouth to match. But what does she really know about sustainable living as it relates to the real world? After all, she and her two friends are new to farming.

Zachary Nemesek is back only until his dad recovers enough to work his own land again. When Zach discovers three helpless females have taken up residence at the old farm next door, he expects trouble. But a mouse invasion proves Jo has everything under control. Is there anything she can’t handle? And surely there’s something sweet beneath all that tart.“

Raspberries and Vinegar is a great book that shows the relationship between Jo and Zach. The story starts with Jo and her two friends, Claire and Sierra, moving into a trailer temporarily while waiting for their communal house to be built. The land that they have purchased once belonged to Zach’s grandmother which explains how he happens on their doorstep that first day…just as Jo’s throwing out a rat’s nest! The girls do run into their share of problems and while Zach is reluctantly there to help, he’s greatly disappointed to learn that more often than not they don’t need his help. However, the girls aren’t the only ones that need help. Zach has just finished not only receiving his degree in Veterinary Medicine but a relationship with his bosses daughter that ended in the losing of his job. While this does work out to Zach’s benefit, due to his father being sick, this lands him in the perfect position to stick around the homestead for a longer amount of time…something Zach is not keen on. What follows is a story of two people overcoming, what they think are drastic, differences to realize that building a life together is what’s best for both of them.

I loved Raspberries and Vinegar for the most part. All of the characters were pretty well fleshed out and the story flowed really well. I will say that I was hoping that when one of the characters died that it would somehow wind up being Zach’s ex that died in the accident, as she was making trouble for him at the time. When that didn’t happen it just showed how true the book was because in real life the good guys aren’t always spared and the bad guys do sometimes get away with things. My ONE complaint with the book is that the girls do come off as very overbearing and pushy with their lifestyle and because of that it actually took me awhile to warm-up to liking Jo. Honestly, I disliked her for about 3/4ths of the book which isn’t a great thing when she’s the main character.