You are here: Home / Beautiful Mind / The Martian by Andy Weir 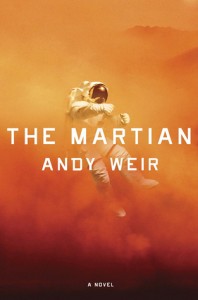 The Martian by Andy Weir

Andy Weir hails from California where he studied computer science at UC San Diego (Did not graduate). He worked as a programmer for several software companies, including America Online and World of Warcraft developer Blizzard.

Having grown up reading classic science fiction writers such as Arthur C. Clarke and Isaac Asimov, Weir began writing in his 20’s. His early work was self-published on his website, Galactanet. Weir’s first published book, The Martian, is actually his third completed novel. It has become something of a phenomenon, having begun as a serialized novel in 2011 before becoming a surprise hit on the Kindle eBook marketplace until finally being opted by a publisher in 2014. Currently, a film adaptation directed by Ridley Scott and starring Matt Damon is slated for a late 2015 release.

Currently, Weir is hard at work on his fourth novel, Zhek. He calls this latest novel a “more traditional sci-fi novel. It has aliens, telepathy, faster-than-light travel, etc.”

Six days ago, astronaut Mark Watney became one of the first men to walk on the surface of Mars. Now, he’s sure he’ll be the first man to die there.

It started with the dust storm that holed his suit and nearly killed him, and that forced his crew to leave him behind, sure he was already dead. Now he’s stranded millions of miles from the nearest human being, with no way to even signal Earth that he’s alive–and even if he could get word out, his food would be gone years before a rescue mission could arrive. Chances are, though, he won’t have time to starve to death. The damaged machinery, unforgiving environment, or plain-old “human error” are much more likely to get him first.

But Mark isn’t ready to give up yet. Drawing on his ingenuity, his engineering skills–and a relentless, dogged refusal to quit–he steadfastly confronts one seemingly insurmountable obstacle after the next. But will his resourcefulness be enough to overcome the impossible odds against him?

I have a confession to make: I often judge a book by its title and/or cover. If a book is written by an author I don’t immediately recognize, I will glance at the title and the cover and decide if it is something I want to read or not without ever checking out the summary on the back. Because of this shameful habit, I almost left The Martian sitting on the shelf, doomed to forever collect dust. The title suggested a story about a little green man while the cover featuring a generic astronaut on a sea of red dust seemed rather boring. I was wrong on both counts. An adventure tale of one resourceful and sarcastic man against the most desolate environment we have ever known, Andy Weir’s debut novel far exceeded all my expectations. Simply put, The Martian is one of the best experiences I have ever had reading a novel.

What makes The Martian such a strong story is its balance. The book deals with some dark subject material: being stranded in an isolated location (to say the least) with minimal resources and little hope of survival. Yet, Mark Watney is such a funny, likable guy. Readers are constantly reminded just how desperate Mark’s situation is only to have the stress alleviated by a witty remark on his (now departed) teammates’ choice in music and television. While never a comedy, The Martian adds enough legitimate laugh-out-loud humor to make the tension bearable. More importantly, it makes readers connect with Mark.

Too often, books feature protagonists that just don’t generate any empathy with the intended audience. Mark is not one of those characters. He is the epitome of what everyone hopes they could be in a similar situation: brave, ingenious, driven, and lighthearted. He knows how bad everything is, but also knows crying about it isn’t going to help so he might as well laugh it off and get to work. Readers will (mentally) cheer at Mark’s every victory and feel a small tinge of despair after every setback. It is impossible not to pull for Mark Watney.

If there is anything negative to be said about The Martian it is the lack of depth of its secondary characters. The team at NASA and Mark’s crewmates aren’t bad characters, we just don’t know that much about them. They are best described as serviceable; they are a means to eventually get our hero off of Mars. We get glimpses into their personalities and even some of their likes and dislikes, but they are never fully fleshed out, especially in the way that Mark is. However, to complain about these characters’ lack of depth is equivalent to complaining that Helen Hunt’s character didn’t get enough screen time in Castaway. The film was always supposed to be about Tom Hanks and his survival. Such is the case for this book.

Honestly, hours could be spent explaining the many selling points of The Martian, from the surprising scientific soundness of the premise and events to the offbeat pop culture references. All you really need to know is that you should read this book. Whether you are a science fiction addict or you never knew there was a Sci-Fi section in your local library, read this book. In its soul, The Martian is a tale that speaks to the inherent strength of the human spirit and how, even in the darkest of times, there is always hope. We need more stories like that. http://amzn.to/1BSNQJz