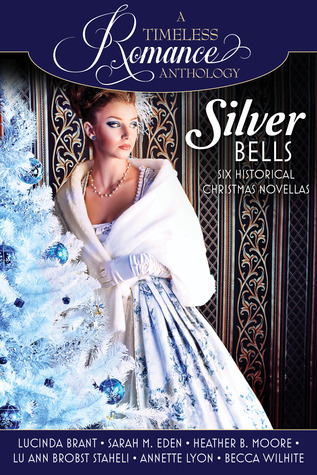 Due to this being an anthology instead of just one book I’m going to do this book review a bit different. I’m going to start with a general synopsis and review of the overall book with a score for the book as a whole. I will then include a synopsis and a little blurb about each of the novellas inside of the anthology, however, I will not score each individual story.

As a whole this is a great set of stories, especially if you like Christmas romance stories. For those who don’t know, an Anthology of stories like this usually contains novellas instead of full-length novels. I find that when it comes to holiday themed stories I prefer anthologies to full-length novels as a lot of times they are better able to weave a story around a small time frame. That is the case for most of the stories in this anthology. I won’t lie there are a few that don’t holdup to some of the others in the anthology, which can be an issue in anthologies. However, that does not take away from the anthology as a whole. If you like historical romances or holiday romances then you for sure need to check out the Silver Bells Collection.

In NY Times & USA Today’s bestselling author Lucinda Brant’s delightful novella, Fairy Christmas, Kitty Aldershot is orphaned and forced to live on others’ charity. Offered a home under the generous roof of her relatives, the Earl of Salt Hendon and his countess, Kitty wants for nothing, not even the affections of Mr. Tom Allenby. But when Kitty stumbles across a letter written by Lady Caroline that reveals how Mr. Allenby would be ruined should he marry the likes of Kitty, she realizes she has been fooling herself all along. Kitty’s world crumbles around her as she recognizes she will forever be alone with no prospects at all.

Fairy Christmas is one of the stories that dragged for me. However, once I got into the story it really started to flow. It took me a bit to get into it because there were a lot of people to keep track of. Once I learned who everyone was and was able to keep up with them the story became quite enjoyable.

Sarah M. Eden’s charming romance novella A Christmas Promise, Sean Kirkpatrick is trying to get to his new place of employment, Kilkenny Castle, in order to start as the new stablehand. His only requirement is to drive a team of high-spirited nags from Dublin to Kilkenny in a certain amount of time. Unfortunately he winds up in a muddy field, stuck, lost, and running out of time. He’s about to lose the job before he can prove himself capable of finishing his first assignment. When Maeve Butler arrives on the scene, Sean isn’t sure if she’s intent on rescuing him or bent on torturing him with her fiery wit and lovely dark eyes.

It might just be the fact that A Christmas Promise takes place in Ireland, or it could be just how good the story was, but this was one of my favorite stories in the anthology. The interactions between Maeve and her family are just great and the ending was one I didn’t see coming.

In Heather B. Moore’s enchanting novella, Twelve Months, Lucien Baxter’s best and most incorrigible friend, Will, dies unexpectedly, leaving behind his new bride and unborn child the week before Christmas. Will’s last request is that Lucien watches over Cora, not just as a benefactor, but as a husband. When Lucien does his duty and proposes to Cora, he’s turned down flat. But over the course of the next few days, Lucien discovers that marrying Cora wouldn’t be any sort of duty after all, but a matter of following his heart.

Knowing how this story was supposed to go I was a bit off when I started reading. A woman’s husband dies and just a short while later she’s going to be falling in love with another man. Being a married woman I couldn’t imagine moving on that quickly if my husband passed away. However, I then started reading the story and the circumstances that Cora was in I could kind of see it. I do think it could have been done a bit differently but it still was a good story.

In Lu Ann Staheli’s sweet romance novella, A Fezziwig Christmas, Dick Wilkins and his best friend Ebenezer Scrooge have been looking forward to the annual Fezziwig Christmas dance for weeks. Ebenezer is practically engaged to Annabelle Fezziwig, and Dick hopes to start courting her younger sister, Pricilla. Once the dance starts, and Pricilla arrives, as pretty and charming as ever, Dick discovers that he’s not the only man vying for her attention. His best friend advises Dick that he has to win Pricilla’s heart, as well as her mother’s favor. Losing his heart has suddenly become very complicated.

A Fezziwig Christmas was probably my least favorite of all the stories in the anthology. To start off it was a bit slow moving and never seemed to pick up the pace. I also felt that it was trying to cash in on A Christmas Carol and didn’t do a great job of pulling it off.

“A Taste of Home” Synopsis

A Taste of Home, a captivating romance by Annette Lyon, we meet Claire Jennings, who’s on her way to spend Christmas with her family. As she rides the train with William Rhodes, who grew up across the street, memories of Christmases past flood her mind. He may be twenty-one now, but she can’t forget his torturous teasing from their school years. At the rail station, Claire discovers that her home is under quarantine because her little brother has measles. She’s stuck in town, away from her family, on her favorite holiday. William stays behind with her, and as Christmas Day approaches and her homesickness deepens, she discovers that perhaps he has changed in more ways than one.

“A Taste of Home” Review

A Taste of Home was my second favorite story in the collection. I loved the relationship that you could see blossoming between Claire and William and I also loved that this person that she saw as a tormentor when she was a child is the one who stays with her for Christmas while her family is under quarantine. This one had a sweet romantic side to it that I really enjoyed.

Becca Wilhite’s entrancing novella, My Modern Girl, follows Margie, who lands her dream job as a clerk at Macy’s department store in New York City. Margie might be new in town, but she’s determined to succeed and prove to Henry that moving to the city was the right decision. As the Christmas season approaches, Margie realizes that being a “modern girl” might not be all she had dreamed of and Henry might have more to offer than she ever imagined.

My Modern Girl was a good story that also was very cute. This is a story that I imagine that you see a lot, the small town girl that decides she needs to be in the “Big City” so she leaves everything…and everyone…behind. Seeing Margie come to realize that her dreams might not be in NYC but back with her beau. This novella was a great way to end the collection.