It’s that time of month again… The Ipsy Glam Bag has arrived in the mailbox with it’s bright pink bubble mailer. When I know that bubble mailer is going to be in the box is one of the only times I actually volunteer to be the one to go get the mail. 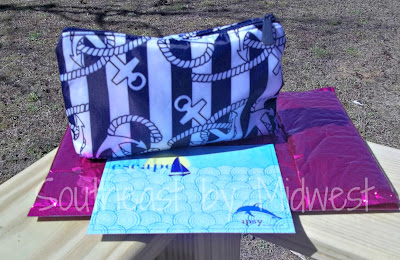 This month’s theme is “The Great Escape” and can I just say that I am LOVING the card in this month’s bag. Those who know me know that I love dolphins so this will be going on a wall or framed and put on my vanity. 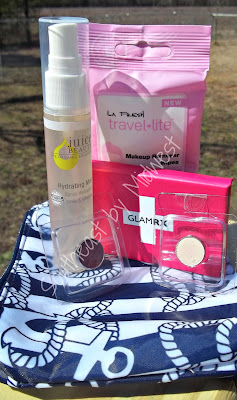 As you can see from the image most of the items are considered travel size items and not necessarily samples. This month we technically got five items, however, one of the items is just another shade of one of the other items so it really is five items from four brands.

Alright lets dig into this bag. NOTE: that this month I am doing things a bit different and comparing what we received to the sneak peeks that Ipsy revealed at the beginning of the month.

Now don’t misunderstand me. I LOVE this bag, this bag is great and I plan on finding some use for it to go straight into my purse. On top of that anyone who subscribes to Ipsy knows that each month you get a bag, so just be honest with us and tell us that the first sneak peek is a peek at what bag we’re getting and don’t be coy because it just comes off as lying.

The second sneak peek that Ipsy released was of a palette. Everyone was super super excited about a possible Z-Palette or at least a mini Z-Palette. Ipsy quickly let everyone know that it wasn’t a Z-Palette but that it was a palette. We wound up receiving a Glam RX Mini Palette. 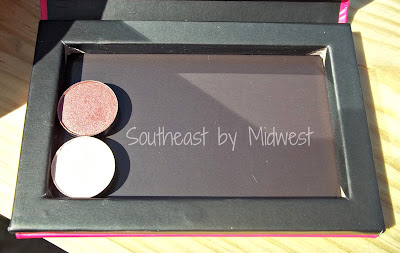 For those who don’t know what a Z-Palette (or any palette is for that matter) is, essentially it is a really flat empty case that has a magnetic base. You can depot your eyeshadows, blushes, bronzers, etc. that are contained inside of a metal pan which is housed inside of a plastic container and move that metal pan over to a palette. That way you have one central location for your items instead of 15 blush compacts running around willy-nilly. 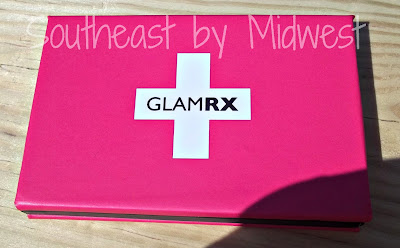 I actually really like this palette. It’s super small, about the size of a credit card, and it’s a bright pink with the company’s logo plastered on the front. This makes it easy to just pick a look and throw it in your purse for touch-ups or makeup on the go. Plus I love me some hot pink. It doesn’t have a lot of space in it but I think that is what makes it perfect, you can’t cram it full of every blush and eyeshadow that you own, you actually have to choose what goes in there. Which is perfect for making you consider what you bring on a trip, and this bag is all about escaping.

The third sneak peek that Ipsy released were these two eyeshadow pots and oh my goodness the masses were outraged. ANOTHER COASTAL SCENTS!?!?!? was the typical response on the photo of these bad boys. While I understand that Coastal Scents has been featured twice before, my initial reaction was “Whoa guys calm down a bit these could wind up being something different.”

While the Yaby site totes that these are highly pigmented you can tell that they are not. You can hardly even see Seashell and the swatch of Azalea Petal is actually several swipes not just one. When I hear (or read) “highly pigmented” I think that I’m going to get some good color with the first swatch, two at the most, not three. This is very disappointing because these fit perfectly into the palette.

The fourth sneak peek that Ipsy revealed was of this hydrating mist. This wound up being a sample size of Juice Beauty’s Hydrating Mist. This product is supposed to “hydrate, tone, and refresh for up to 3 hours.” I spritzed this and it smells liked dried roses and to me like Big Red chewing gum. I seem to be the only one that gets that though. 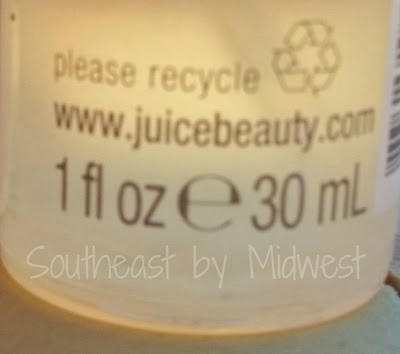 What I loved about this was not only did it tell you about the product on the packaging, have a list of ingredients, a link to their website, but look it’s 1 fl oz of product. I don’t think I got anything that big during the time that I was subscribed to Birchbox. There is definitely enough here for me to test it out SEVERAL times and decide if I want to purchase this product.

The final sneak peek that Ipsy revealed were some makeup wipes. Due to the little image on the package that says “Carry-On Friendly” people quickly deduced what these would be. I didn’t see a lot of complaints at that time about them, however, since people have started receiving their bags I’ve been seeing a lot more. Which I don’t really get due to the fact that this is a sample subscription service, as a matter of fact LA Fresh sells these as an 8-count package. Yes it is travel sized, which does mean smaller, but it is still a full sized product from their company. This is also a lot better than what I have seen people get from Birchbox, I’ve seen some people get just one or two wipes to try for the product.

LA Fresh Wipes – $1.99
Juice Beauty Hydrating Mist – $3.26
Yaby Eyeshadows – $6.30
Glam RX Palette – $6.00 (Guestimating on this because while this is the same size that Glam RX offers it doesn’t come with the makeup that their actual touch-up product has)
Bag – $6.00 (I’m valuing this bag at this price because we don’t know how much it actually cost but this is how much I would pay for a bag like this in a store)

So that is the March 2013 Ipsy Bag. For a $10 monthly subscription price I received about $23.55 worth of products. This is for sure not as good as some of the other months but I’m not in the negative AND I believe I will use and enjoy everything but the eyeshadows, and as previously stated I LOVE the bag.

If you are interested in signing-up for a monthly subscription head over to their website but it should be noted that you might want to sign-up ASAP as their is a wait list that is looking to be about 1-2 months in length.